VA Testing Chantix on Vets Without Warning of Dangers

Here’s an article from the Washington Times which details the problems with testing drugs on a very vulnerable portion of the population – veterans of the armed forces returning from duty in Iraq.

The pertinent section to you as the reader involves Chantix, the drug that has been linked to depression and suicide in the U.S., U.K. and elsewhere.

Click here for the full article at the Washington Times.

Here’s the portion that pertains to Chantix: 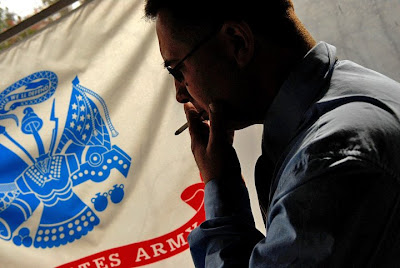 [President-Elect Barack] Obama, [Rep. Bob] Filner and other lawmakers on both sides of the aisle called for an investigation into a smoking cessation study, which Mr. Peake immediately initiated.

The experiment tracked 240 veterans taking the drug Chantix to examine which forms of counseling were more beneficiary – smoking clinics or through a separate counselor. James Elliott, an Army infantryman who was wounded in Iraq, says the drug caused him to experience a mental breakdown and a showdown with police who used a Taser to subdue him in February.

Mr. Elliott said the VA didn’t warn him about new FDA concerns that Chantix was linked to psychotic behavior and nearly 40 suicides until nearly a month after his disturbing incident occurred earlier this year.

The internal investigation confirmed that Mr. Elliott was not alone. It took medical professionals involved in the study anywhere from 16 to 134 days to notify participants taking Chantix about the new warnings.

As with any mention of Chantix, I will take this opportunity to remind the reader of my personal stance on psychotropic drugs, which is, quite simply, “don’t take them.” The benefits very rarely outweigh the risks, and there are nearly always side-effects.

As for the ability of a drug like Chantix to assist you with smoking cessation, my advice is more specific: “you don’t need it.” You can quit smoking on your own, without drugs, patches, gums, lasers, needles or even hypnosis.

You can do it.

When I use hypnosis with my clients, I give to them what some ex-smokers have given to themselves — a clear awareness of their motivation, along with a focus on the benefits of being a non-smoker. This not only works, it also produces a feeling of accomplishment and self-sufficiency – independence, if you will… that can only be achieved through learning to use the power of your mind.

Those who are successful quitting through other methods do receive the benefits of being smoke-free, which is fantastic. What they don’t receive are the benefits of learning just how powerful they truly are when their mind is properly focused.

It’s not just getting the results you desire that’s important – it’s also the sense of pride you feel that fuels your ability to accomplish other things in life that are perhaps even more meaningful.

Beverly: “I Just Forgot That I Was a Smoker”

Eidé Magazine Writer Got More Than a Good Article On Hypnosis!